Dear Past Self: Fall Out Boy's Pete Wentz Interviewed

Pete Wentz is driving around LA, speaking to me over the phone about his newly-launched range of jewellery and apparel, Ronin.

As far as rock star business enterprises go, it’s certainly extravagant, and the website’s description of the rings, pendants and hoodies held therein – “born out of the idea of wandering, a samurai without a master, and the free dreams that accompany facing the world on your own” – adds to the initial sense that Wentz’s professional career may have ballooned into parody, the kind of project Connor 4 Real from Popstar: Never Stop Never Stopping might have signed off on.

“We would go and sample products in the jewellery district in downtown LA, learning why one gold looks more yellow than the other,” he tells me when I ask about it. “It’s been a really interesting learning experience.”

But then Pete Wentz, to borrow Lana Del Rey’s favourite American poet Walt Whitman, is large; he contains multitudes, and some of those multitudes just happen to involve samurai-themed lockets. Among other projects, he owns a clothing company, a film production company, a nightclub, and a minority share in American USL soccer team Phoenix Rising.

“It scares me sometimes, watching him,” Patrick Stump once joked. “The two seconds you're not with that dude he's made 30 decisions that are going to affect our band for the rest of the year.”

Ah yes: he’s also, you may recall, the bassist in Fall Out Boy.

Such records are inevitably a time for bands to take stock of what they’ve already achieved and what value they might continue to offer the world, and the single seems to acknowledge that duality: “Dear future self, I hope it's going well / I'm drunk on cheap whiskey in an airport hotel,” Stump reflects on the new track. Like Janus, the Greek god of beginnings, endings, and Wyclef Jean collaborations, Wentz finds himself gazing in all directions.

In the near future lies a reminder of the past. Despite the fact that all three bands have new albums coming out, it’s perhaps an easy take to view next year’s ‘Hella Mega Tour’ – Green Day, Weezer, and Fall Out Boy performing at a number of stadium dates together on a triple-headliner bill – as a nostalgia trip.

Is it something Wentz worries about?

“I think about that for sure,” he says. “There’s a danger that, once you become known as one thing, the world knows you as that thing forever. When you’ve been doing art for 15 or 20 years you do have to think about your legacy, but it’s really important to remember why you did it in the first place.” However cynical your view, it’s hard to argue that the band don’t deserve a victory lap with two of the most influential acts in pop-punk history. “It would be insane for us to turn this tour down because we grew up on ‘Dookie’ and the ‘Buddy Holly’ video – those things were super influential on the early years of our band. So this is wish fulfilment in that way. But then I think that’s why it’s important that we did the Wiz Khalifa tour, that we do remix albums, you know? We wanna do both.”

On musical terms, at least, Fall Out Boy have often done just that. Their first two albums, ‘Take This to Your Grave’ and 2005’s breakout ‘From Under the Cork Tree’, are perhaps their most straightforward in genre terms – but even then, ‘Dance Dance’ was arguably more playful and inventive than anything the cross-sections of pop, emo and punk had served up in the preceding decade. By the time 2007’s ‘This Ain’t a Scene, It’s an Arms Race’ hit number two in the Billboard charts – their commercial peak to date – the band were already steadfastly toying with hip hop and R&B in both their production values and collaborators.

“I think that there was a time when we were doing that and people were scratching their heads a little bit,” Wentz says. As he rightly points out, the days of cultural tribalism in listener habits are all but dead now in the Spotify age. “I think genre has broken down so much more now, the way people listen to music, that people are more open to it.”

‘Make America Psycho Again’ is a fine example, a collection of remixed tracks from 2015’s ‘American Beauty/American Psycho’ featuring guest appearances from Azealia Banks, Migos and Big K.R.I.T. among others. The title, of course, is a direct reference to the campaign slogan Donald Trump was using in his Presidential election campaign at the time. I ask whether the band are cautious about straying into political territory.

“I don’t think you can avoid it anymore,” he tells me, picking back up after the signal drops on our international call. “We live in a time of super inauthenticity – people taking pictures of food that you don’t even know if they eat, people having fear of missing out – and so I think, in a weird way, to cut through you have to be super authentic. Which is, to me, what people like Lana Del Rey, Billie Eilish, Skrillex, Kanye, and whatever do. You just gotta be who you are and cut through all the noise. And I think people are… maybe not more forgiving, but more appreciative of you being honest about that stuff.”

There was a period in the 00s when Wentz was unavoidable; the video for ‘This Ain’t a Scene…’ hilariously parodied the bassist’s newfound gossip-mag status – later compounded by his marriage to Ashley Simpson in 2008, and subsequent divorce less than three years later – but inevitably, it wasn’t always something he could brush off. In February 2005, Wentz attempted suicide by taking an overdose of the anxiety medication Ativan, and ended up spending a week in hospital recovering.

Today he still finds the pace of modern life extremely deleterious to mental health, not least dealing with the quagmire of social media on a daily basis. “Every day you wake up and there’s a new take, and it’s kind of relentless,” he says with a sigh. “It can get a little numbing when you look out across social media. It can feel really lonely.

“I think that now, more than ever, who you are and what you project into the world will inform your politics, how you interact with people, how you feel when you wake up in the morning. I just want to craft things that are important to Fall Out Boy, to insert something meaningful into people’s lives. That’s really, really what’s important.” 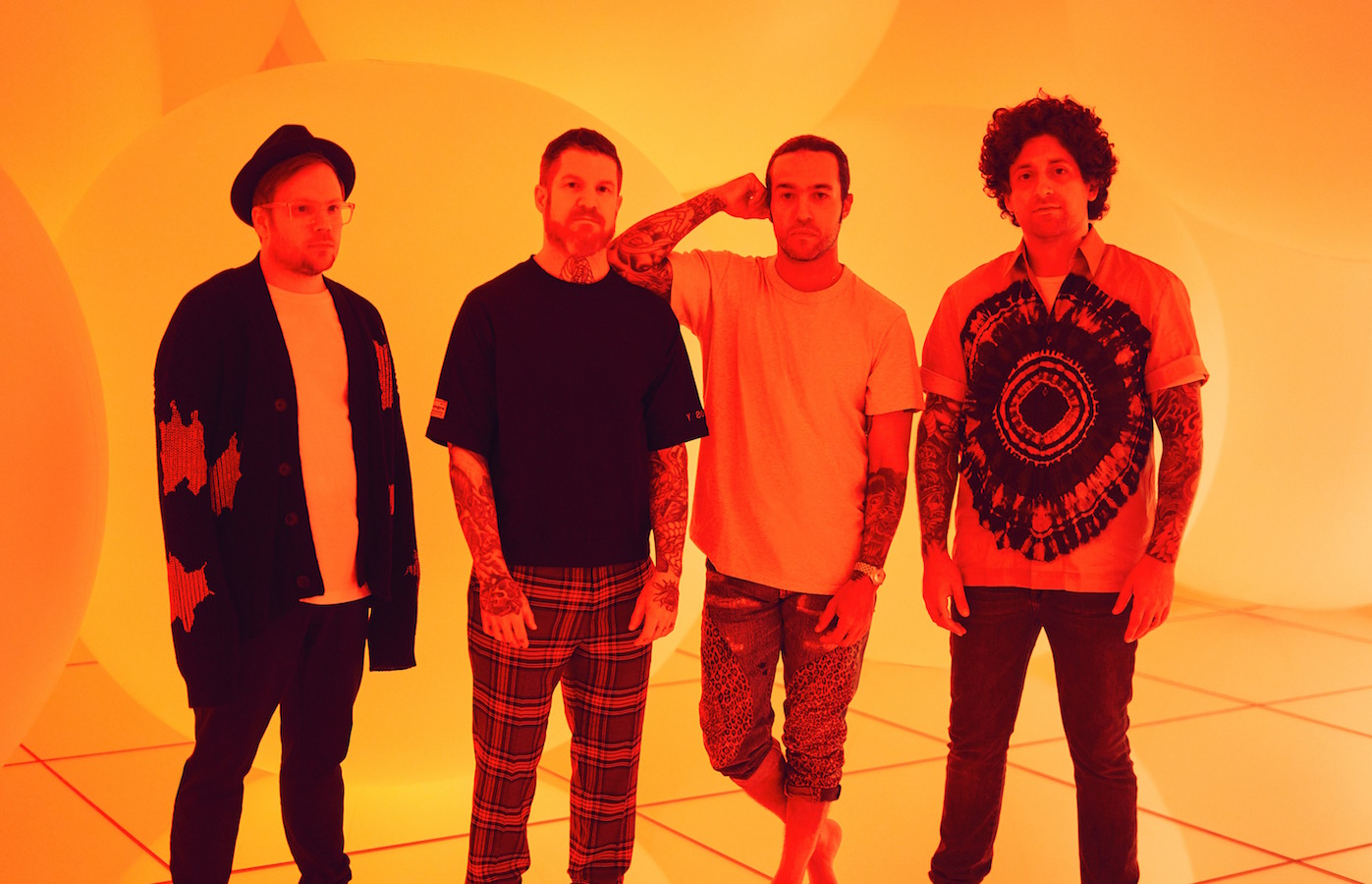 For all the extracurricular projects, it’s clear that Wentz’s heart still beats faster for Fall Out Boy. He’s ready to keep taking the band forward, he tells me. “But it’s got to be something interesting. It’s got to have a perspective. There’s something exciting about Quentin Tarantino being like, ‘I’m just doing 10 or 12 movies and that’s it’. It’s exciting because it makes every movie have meaning. So to me, whatever it is, the next thing has to have perspective, has to have meaning, has to have feeling.”

“Maybe it’s scoring a movie, I don’t know. It’s got to be something a little bit different, I don’t think it can be a straight-up album from us.”

Beyond the nightclubs and bling, Wentz is a remarkable philanthropist – a term which has perhaps been sullied in recent times for its application in sanitising billionaires, but which feels appropriate given Wentz’s personal history, and the fact that his work directly supports those who suffer from the same mental health issues that he’s battled over the years. His work as a spokesperson for The Jed Foundation’s ‘Half of Us’ campaign, a program aimed at lowering the rate of teenage suicide, has been invaluable. It’s the kind of supported he could have used 15, 20, 25 years ago.

“I think we live in a time where there is less of a stigma around mental health, and I hope the next generation will feel even more open to speak about it,” he tells me. “Knowing that you’re not alone and other people are going through similar things is so important for our culture to move ahead. So many times when I was younger I thought: am I the only person who feels this way? I think it can be less isolating to know that, hey, Jay-Z feels that way sometimes too.”

For Wentz, who now has three children, the idea of young people today facing those problems alone is terrifying: “I’m raising kids in this world, and I think it’s important for them to know that talking about this doesn’t mean you’re weak or alone. None of it’s weird, none of it’s you by yourself. Young people need to feel that they’re part of the community as a whole.”

Across such an extraordinary life and career, I wonder if he carries any regrets. There’s a brief silence on the line, one that transcends the usual delay carried between the pink-sunset streets of LA and the Cardiff Travelodge I’m calling home for the night.

“In my twenties I felt lots of anxiety and lots of stress about every decision that we made, instead of just living life. I’ve realised that sometimes you’ve just got to live life and trust that you’ll make it from A to B to C. Live through the ups and downs. I think that’s something important that we don’t always impart on young people.”

Spoken like a man who knows real gold when he sees it.