A week after this interview, the members of K-Pop group A.C.E. - Jun, Donghun, Wow, Byeongkwan and Chan - will meet their fans in concert. Like everything in 2020, it’s a streamed event but any opportunity to be in the company of their fanbase, Choice, is an important one. “Being with our fans who love us makes us feel even more complete,” says Chan, the youngest at 22. “That’s our driving force.”

This isn’t a new sentiment for them - like all idol groups they are vehemently passionate about those who support them - but there’s a deeper poignancy considering the challenging path A.C.E have walked since their debut in early 2017. Choice, they say, almost in perfect unison, have always been what’s kept A.C.E mentally strong in the tough early days when money and resources were limited, and when none of them knew where their careers were headed during long waits between releases.

So finding ways to be with their fans, whether through writing album tracks dedicated to them, video call events or digital concerts, aren’t just sweet gestures or business acumen, they’re lifelines.

There’s also an understandable frustration: due to Covid-19 restrictions, for the past five weeks A.C.E have been performing to TV crews in empty studios as they promote ‘HZJM: The Butterfly Phantasy’, their first record in eleven months, which is a substantial period in K-Pop. The bittersweet irony isn’t just that there are more eyes on A.C.E than ever before, but that this is some of their finest work, from the exquisite teaser images shot in water tanks to live performances so uncompromising they deserved an audience present to leave breathless.

The EP’s title riffs off the Chinese fable, ‘The Butterfly Dream’, its opener is entitled 'Golden Goose' after the Aesop tale, and the lead single - “Goblin (Favorite Boys)” - bases itself around the playful, golden bat-waving goblins in Korean mythology. The video teaser - simply entitled 'Opening Video' - features dark fairy tale staples like spells, thorns, fruit and blood. Byeongkwan considers their affinity for tales to be a natural, effective fit for their song’s messages and “the good thing is that everyone knows the stories so it was easy to tell the story in a modern way.”

“Whatever you do, do it your way, don’t blame anyone / Be your style, your color, be one of a kind” raps Wow on “Goblin (Favorite Boys)”, a towering, muscular slab of pop-rock.

“There’s one message that we wanted to convey the most - don’t lose yourself no matter what happens,” says group leader, 26 year old Jun. He’s known for a physical, sometimes surreal, wit and elastic, spontaneous expressions but, equally, he takes his leader role seriously, dwelling on his replies. “A lot of people press forward because of their dream or because they’re being pulled along by someone or even because of competition. And because of those factors I think a lot of people forget who they are or what they like.”

Competition, and maintaining one’s identity in the thick of it, is nothing new to A.C.E who took part in the parallel-running survival shows Mix Nine and The Unit, designed to raise the profiles of lesser known groups at the time (Chan won a place in The Unit’s temporary group UNB and was absent from A.C.E’s 2018 promotions). During Donghun, Byeongkwan and Wow’s audition for Mix Nine, YG Entertainment’s CEO Yang Hyun-Suk made a snide remark about A.C.E’s eye-catching short shorts during performances of their debut single, 'Cactus'. Main vocalist Donghun didn’t miss a beat, calmly pointing out YG’s own boy group, WINNER, had worn similar shorts for their own promotions, leaving the CEO speechless. To sass one of K-Pop’s founding fathers, the man who, for a short while, held their future in his hands, was wildly audacious. 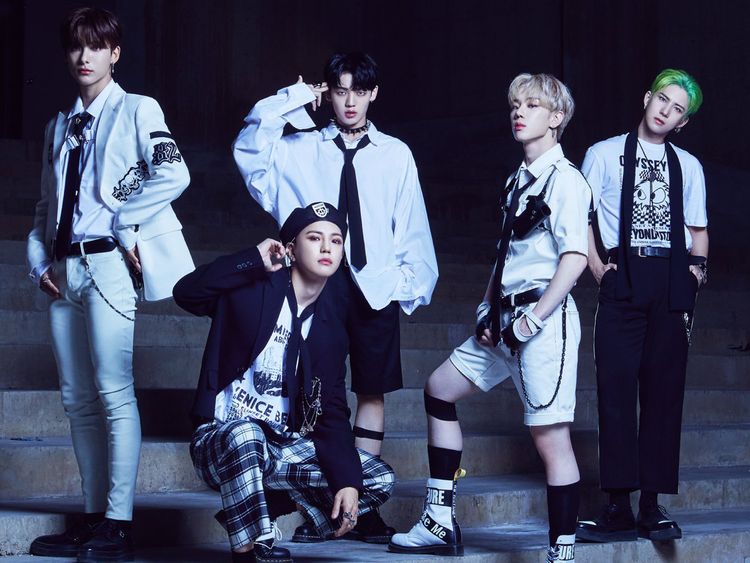 Donghun laughs at the memory. “I was like, ‘Whatever, I don’t care’,” he grins, “because we were confident in our dancing and singing skills, and the only thing we’d talked about [prior to the show] was if we show the world what we have, we’ll not regret it. So we didn’t worry.” This freedom of feeling is a vital part of the group’s DNA, from their busking days and the covers - whether it be 5SOS or Blackpink - they still release, to their vlogs and YouTube diaries in which they’re frequently chaotic, raw and unpretentious.

A.C.E are the only group signed to their label, Beat Interactive, which has helped smooth a way for their autonomy, but this alone doesn’t quantify the carefree authenticity of A.C.E. The first factor, Donghun says, is that “the company trusts us and just lets us make our contents.” The second is desire. “Above all,” he adds, “we want to show our daily lives, to talk about our offstage stories and natural sides.”

And while these are such advantages of a small label, the disadvantages can be intense. K-Pop is a costly business with comeback expenses running into the hundreds of thousands of pounds. Donghun has never experienced stress when “competing with other groups or other programs. The hardest time was when we didn’t know when our next album would come out, that was the only fear.”

A.C.E’s main comebacks have consistently been nearly a year apart. They filled their days with practising but time took on a painful slowness and Donghun admits that between 2018’s “Take Me Higher” and 2019’s “Under Cover”, he struggled. Jun empathises; he too has gone through “coming to peace with feelings of hardship and tiredness” on the long run-ups to albums, teaching himself how to see situations more positively. “That resulted in a deeper relationship between our members and [with] our skills, which allowed us to grow,” he says.

Their musical journey has been an exciting though creatively unpredictable one - from hardstyle techno to bubbly pop and blustery hip hop. It’s with the rock-tinged “Under Cover” and “Goblin (Favorite Boys)” that they’ve found their surest and flashiest footing, however, Jun, who trained for nine years before debuting, has no inclination to rest on his laurels. “It’s true these two songs showed the best performances of A.C.E but we haven’t wanted to limit ourselves to any genre since we debuted and we’ll try more diversity, we want to experience new stuff.” Byeongkwan agrees: “The genres have changed but the story hasn’t changed at all. On the next album I’d like a chance to challenge popular genres, such as Latin.” Wow is far quieter than his bandmates today but, given he’s the man who smouldered and thrusted through “Black and Blue”, it comes as little surprise that he’d “like to try hard rock”, much to his bandmate’s delight. Chan throws up devil signs, launching an onslaught of air guitar, Jun furiously drums, Donghun and Byeongkwan adopt The Beatles’ 1960s strumming head wobble, and Wow, with a sidelong glance, laughs at them.

Their trajectory in terms of charts and fandom numbers hasn’t always shifted in tandem with A.C.E’s growing sonic triumphs. A quick scan of stan Twitter and you’ll find the terms “slept on” or “underrated” frequently attached to their name. During this year’s On The Road, a series following A.C.E on a short trip, Donghun quietly noted that no one recognised them as they travelled, thus he needed to work much harder to raise their profile. “It’s not frustrating to the point where we want to give up or anything like that,” Wow interjects. “But we can have a hard time when the results don’t come out as well as how much we practised.”

It’s perhaps a strange crossroads to stand upon, to be loved so loudly and fiercely by their fandom, yet feel small in the wider scheme of things, but for Donghun it’s a better place than where he’s been. “At first I wanted to succeed sooner but I got resentful and frustrated,” Donghun says, neat in a black turtleneck sweater. “As time went by, [I realised] success is how hard I try and how happy I am every day. Living with the precious people around us is really important.”

The restlessness for momentum still lingers in their two youngest. Byeongkwan names himself and Chan, who listens intently and fidgets incessantly, as the most impatient of the group. “Honestly, at times it’s helpful because I can prepare non-stop. But it’s not helpful when I’m physically not in good condition, or on the psychological condition of our members,” muses Chan. To balance it out, his idea of what success looks like has evolved. “That we debuted and we’re doing what we love,” he continues, knees bouncing as he speaks. “Also being able to do what we want is fulfilling our desires.”

Adds Byeongkwan resolutely: “After debuting, we shared all our goals and we’ve helped each other so much. As a team, we have only one goal and we go together.” What is this singular goal? Jun, Chan and Donghun begin speaking on top of one another. It’s not so much a squabble as a minor cacophony and ends as abruptly as it started. Byeongkwan pulls a face. “Ok, maybe there are too many goals….” he smiles as Jun doubles over laughing. “But there are so many groups nowadays,” Byeongkwan says resolutely, “we want to exist and last for a long time with our fans.”

A.C.E’s camaraderie is, for want of a better word, tenderhearted. For all the roasting and roughhousing that goes on between them, they’re also gentle and attentive with each other - ask Donghun for one of the biggest challenges he’s faced, and he says it was Chan’s absence from their “Take Me Higher” promotions. That’s not to say, however, life is always peaceful. “We’re all good when we’re at the dorms,” says Chan, “but when it comes to practice, we want it perfect so our opinions crash into each other. That’s the only thing we have arguments over!”

Byeongkwan insists they’re more “discussions” than anything else. A loud sigh escapes him. “Sometimes we fight dramatically, but we figure it out by talking.” Jun comes at it with level-headed practicality. “The best team gets stronger when they face difficult situations and win them together,” he opines. “That's what we do. We have conflicts but we learn how to respect each other. It makes us more mature.”

This year has already been transformative. They’ve seen a 200% uptick in album sales. They performed at the Oscars afterparty for ‘Parasite’ (“We were so excited and still can’t believe we were there. After that we got more confident and it shows on stage,” recalls Byeongkwan), and scored their first nomination for first place on a TV music program. “Unfortunately we didn’t win,” smiles Chan, “but it was a really good memory.”

To get here, they’ve had to strive when others may have run out of strength. Theirs is a resilience and tenacity that began long before A.C.E debuted but continues to this day, and why the humble cactus - able to survive the harshest physical conditions, the title of their debut single and a recurring motif in their subsequent work - is their inner symbol. “The cactus has the meaning of being about our own self,” says Jun. “A cactus spends a lot of time and effort to make one flower bloom, and that really correlates to us in the way we’re achieving our dreams.”